It was in 1855 when the Territorial Legislature defined a certain portion of land west of Shawnee County and named it Richardson County. This county was named after William P. Richardson, a congressman from Illinois, who introduced the first Kansas and Nebraska Bill in the House of Representatives, which made certain Indian lands territories in 1854. The county was attached to Shawnee County for business and judicial purposes and had no officers or records. In the early days of the county, the greatest settlements were in present day Wilmington and Wabaunsee Townships. In 1856, a group of settlers from New Haven, Connecticut, moved into the county near the Kaw River where a town site called Wabaunsee had been previously laid out, to support making Kansas a free state.“Wabaunsee,” meaning “Dawn of Day” in the Indian language, was named after the famous Pottawatomie Indian Chief Wabansi. The congregation of Henry Ward Beecher, a well-known minister from Brooklyn, New York, assisted these settlers. In May of 1862, a new stone church was dedicated at the Wabaunsee town site and called the Beecher Bible and Rifle Church. This church building still stands today and continues to have weekly worship services. 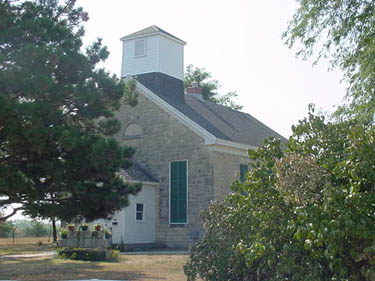 In 1859, a petition was made to the Territorial Legislature to change the name of the county from Richardson to Wabaunsee. This request resulted because William P. Richardson, whom the county was named after, was pro-slavery while many in the county were abolitionists. Since the population had increased substantially, county residents signed another petition asking that the county be organized into a separate and distinct corporation for revenue and judicial purposes. The request was granted and an election of county officers was held on March 28, 1859. There were two voting precincts in the county -- one at Alma, and one at the village of Wabaunsee. The total number of votes polled was 111. The county seat was located at the Wabaunsee town site and four townships created: Alma, Wabaunsee, Mission Creek and Wilmington. A year later, three commissioner districts were drawn up. 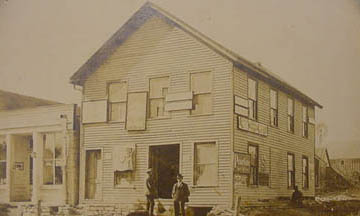 When the county organized in 1859, the town site of Wabaunsee was selected as the county seat because it was the only place in the county that resembled a village. No permanent building was constructed for the courthouse, and it was located on the top floor of a general store. The population continued to grow, and those living in the southeast part of the county began to complain about the distance to the county seat and their desire for a more central location. An election was held on March 6, 1866, to determine the county seat location. Alma received 137 votes to Wabaunsee’s 112. However, questions arose about the legality of the vote, and a new election was held on November 22, 1866. Alma again tabbed the most votes of 142, while Wabaunsee received 114. Alma was then declared the county seat. and the records were moved from Wabaunsee to Alma in time for the January, 1867, Board of Commissioners meeting. The records and safe were hauled in two wagons and deposited in the new courthouse known as the Kaufman Building, which was located where the Wabaunsee County Historical Museum building stands today. The first story was used as a general store and post office, with rooms behind that for the county offices. The upper floor was the courtroom and was also used for church and social functions. 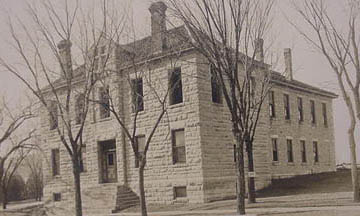 The issue of the county seat location did not die, and in January of 1871, a petition to re-locate the county seat was granted. An election was called for February 7th. The town of Newbury offered land for a courthouse square. Eskridge offered a courthouse square with a building. Alma pledged to give the county a safe, well-built, handsome stone building worth $6,000 to $10,000. In the election, Alma received 369 votes, Eskridge 256, Newbury 217, and Wabaunsee 2. Since the law required that a place must receive a majority of the votes cast, another election was called for February 21st. At this election, Alma received 465 votes, while Eskridge garnered 429. 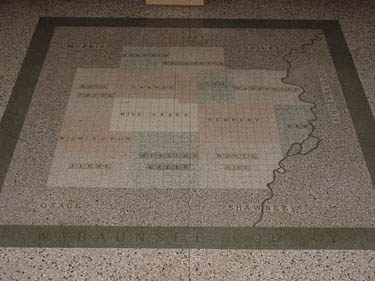 After Alma was again declared the county seat, construction of the new courthouse building began and completed in 1872. This native stone building was located in the northeast corner of the present day courthouse square. The total cost to build and furnish the building was close to $8,000. In 1893, an addition to west side of this courthouse was built and then occupied by the county treasurer, register of deeds, clerk of the district court, county superintendent, and sheriff. At the same time, the jail was remodeled and a second story built over it. Over the years, the county continued to purchase the lots on the same block on which the courthouse was located. By January of 1931, the county had purchased the entire square block. 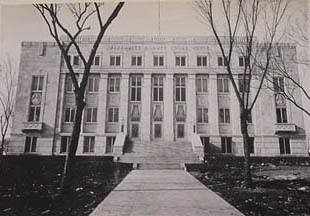 The new building was 69 x 103 feet in size and four stories high, counting the sub-basement, and set in the middle of the courthouse square, which is 350 x 355 feet with a natural drainage each way from the building. It was constructed of Carthage stone on the outside, giving it the appearance of a granite building when completed and polished. The outside walls were to be backed with eight inches of native stone, making all of the outside walls 15 inches in width. The floors and steps of the building were made from terrazzo, a material of broken stone and cement, and then polished. The stairways, handrails, and corridor walls were made of marble, which was mined, cut and polished by the Carthage Marble Co., Carthage, Mo. A map of Wabaunsee County was carved in the terrazzo floor of the second floor corridor showing all 13 townships.

The building was completed at a cost of $148,347.57. With the furnishings, the total courthouse project cost was nearly $165,000. On December 10, 1931, the Wabaunsee County Commissioners accepted the new courthouse from the general contractors as a completed building. Keys were then issued to the officers, and most of the offices had completed their move into the new building by Monday, December 14, 1931.

On January 22, 1932, a sale was held for the old courthouse furniture. Bids were then let for the removal of the old courthouse, and it was purchased by Carson-Reed Rock Crushing Co. of Junction City. The old building was removed in May of 1932. Some of the larger stones were salvaged, and the waste rock was crushed and used for gravel on some Alma streets. 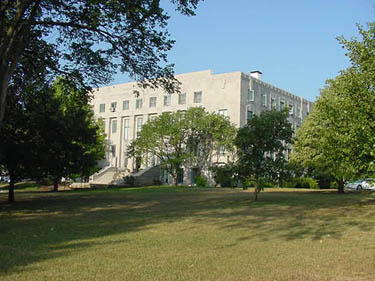